Excitement for a Boy Eager to Spend Time Writing 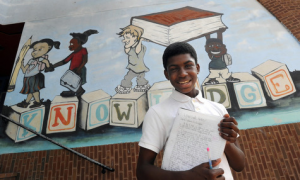 Terrell Kellam, who has just completed seventh grade at Margaret Brent Elementary School, is looking forward to filling another notebook with the paragraphs of his fantasy novel. He plans to polish his work, about a girl with superpowers who won’t stay dead, with the skills he learned this school year.

At age 13, Terrell Kellam has already discovered the very real pleasure that can come from doing meaningful work.

That lesson is one that some grown-ups never learn. But this newly minted eighth-grader at Margaret Brent Elementary School in Charles Village is looking forward to summer vacation because it will give him more time to work on the huge fantasy novel he’s been writing for the past year.

On the last day of school Friday, he was looking forward to polishing his prose with the editing skills he gained this past year in class. “Writing can be enjoyable and relaxing, and writing can be good for venting,” Terrell says. “I can focus and have a well-concentrated mind. Sometimes, when I do it, I can go into my happy place.”

Life and Death Forever fills one spiral-bound notebook and has spilled over into a second. The novel, written in Terrell’s upright, precise hand, tells the story of a girl who is incapable of staying dead.

“She has a superpower in her that causes disasters,” Terrell says. “She’s on a journey to find out what it is, so she can control and master it.”

Terrell has at least two superpowers of his own: imagination and charm.

At Margaret Brent, he’s known for making daily rounds, for sticking his head inside every office just to say hello. The school crossing guard refers to Terrell as “my baby.” Here’s a kid who comes to school up to a half-hour early every day. When she asked why, he told her: “School is my job, and I have to prepare for it, just like I do for any other job.”

But for all Terrell’s seriousness, he’s looking forward to bike rides, kickball and video games – even to running errands for Dorothy Johnson, the aunt with whom Terrell is living in Southwest Baltimore, he says, for now.

Terrell hunches over a child-size table and begins to read aloud, his legs crossed at the ankle and kicking back softly. “I always wondered why I am here and how I got here,” he reads. “I was born when the universe started.”

He seems completely immersed in the world he’s created. His brow furrows and releases, his mouth tweaks up at one corner, his eyelashes dance.

Terrell Kellam is in his happy place.